January | Our 3-meter geodynamo experiment was featured in a Terp Magazine article. Check it out here.

February | Lathrop was interviewed by Associated Press for an article on the Earth's magnetic field. Check it our here.

September | Our 3-meter geodynamo experiment was featured in a PBS SpaceTime YouTube video that talks about the Earth's magnetic field.

February | Our 3-meter geodynamo experiment was mentioned in a National Geographic article that talks about the Earth's magnetic field.

July | Our 3-meter geodynamo experiment was featured in a Veritasium episode. Check it out here.

December | Our 3-meter geodynamo experiment was featured in a Chemical & Engineering News article. Check it out here.

July | Our 3-meter geodynamo experiment was featured in the NHK BS Premium channel in Japan. The episode aired July 15 and a preview in Japanese is available.

October | Our 3-meter geodynamo experiment was featured in the FOX show Xploration Earth 2050. The episode aired October 29, 2016 and can be accessed via Hulu.

August | Dan Lathrop was interviewed for a BBC Radio feature on the Earth's magnetic field (begins at the 8:18 mark), related to our 3-meter geodynamo experiment.

July | Dan Lathrop was interviewed for a Voice of America feature video on our 3-meter geodynamo experiment. 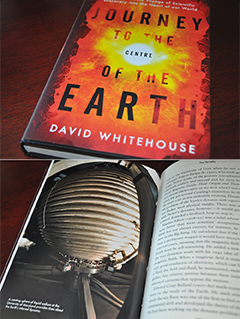 April | Our 3-meter experiment was featured in David Whitehouse's book Journey to the Centre of the Earth.

March | Our article Direct observation of Kelvin waves excited by quantized vortex reconnection was featured as the cover image for a Quantum Turbulence special feature in the Proceedings of the National Academy of Sciences.

March | The lab was visited and researchers interviewed for an article in The Washington Post on the effect of the sequester on university research funds.

March | Daniel Lathrop and Barbara Brawn-Cinani have published an News And Views article in Nature Physics on vortex rings titled Fluid dynamics: Lord Kelvin's vortex rings, which was mentioned in the press by articles in Scientific American and El Dia.

January | The 3 Meter Dynamo Experiment was featured in Discovery Canada: Daily Planet, which can be seen here on Youtube.

January | The Weather Channel filmed inside the lab.

Nov | Daniel Lathrop has won the 2012 Stanley Corrsin Award presented at APS DFD 2012 Meeting for "For his striking observations of flow in a quantum fluid, including detection of counter-flow that confirmed the two-fluid picture of quantum fluid, observation and characterization of reconnections of quantized vortices, and the discovery of an inverse-cube tail in the velocity distribution of superfluid turbulence."

September | Freja Nordsiek visited the Physics of Fluids group at the University of Twente in the Netherlands for two months on a collaboration in Taylor-Couette flow.

Nov | Dan Lathrop has been elected fellow of the  American Association for the Advancement of Science .

Sep | Nick Ouellette, assistant professor at Yale will spend his Sabbatical Year at the University of Maryland working with Dan Lathrop.

Aug | Horizon documentary and article by the BBC on the Earth's Core featuring Dan Lathrop and the 3m experiment. The documentary is available here.

Jan | The article Angular Momentum Transport in Turbulent Flow between Independently Rotating Cylinders featured in the Search&Discovery article "Exploring the extremes of turbulence" of the January issue of Physics Today and in the synopses of physics.aps.org " Heat and twist of turbulent flows".

Nov | Matthew Paoletti has been awarded the 2010 Andreas Acrivos Dissertation Award in Fluid Dynamics from the American Physical Society. This award recognizes exceptional young scientists who have performed original doctoral thesis work of outstanding scientific quality and achievement in the area of fluid dynamics. Matt received his Ph.D. in Physics in 2010. His advisors were Michael E. Fisher and Dan Lathrop.

Jul | The results on reconnection of quantized vortices featured in the July issue of Physics Today. The title of the Search&Discovery article is "Filming vortex lines reconnecting in a turbulent superfluid".

May | Prof. Lathrop is presenting "Rotating turbulence and precession in a laboratory model of the Earth's core" at the "Summer School and Workshop on Self-Organization in Turbulent Plasmas and Fluids" at the Max Planck Institute for the Physics of Complex Systems in Dresden.

May | The new website www.nistfellows.umd.edu for the NIST Fellowship program is online.

May | Matt Paoletti got a post-doc positon at The University of Texas at Austin. Starting from September he will start to work with Prof. Harry Swinney at the Center for Nonlinear Dynamics.

Apr | Prof. Lathrop is attending the internation workshop "Symposia on superfluids under rotation" at the Helsinki University of Technology presenting "Experimental characterization of reconnection, counterflows, and quantum turbulence".

Dec | The lab presents 3 talks and 1 poster at the 2009 AGU Fall meeting in San Francisco.

Nov | At the 2009 DFD meeting in Minneapolis the lab members presented the following talks: Quantum turbulence ,Velocity statistics in superfluid and classical turbulence, Dynamics of the Lattice Array Formation in Superfluid Helium, Visualization of quantized vortices near the lambda-transition using nanoparticles , Bi-Stable Turbulent Spherical Couette, Turbulent Taylor-Couette flow between independently rotating cylinders , Precession in a laboratory model of the Earth's core , Spin-up and Spin-down in a Spherical Annulus.

Nov | Lay language paper written upon invitation for the Division of Fluid Dynamics meeting 2009 : "Imaging an Array of Quantum Tornadoes".

Sep | A new member is joining the lab. Myunghwan Park is a graduate student and he will work on chaotic circuits.

Aug | A new member is joining the lab. Cecilia Rorai is italian graduate student from the Doctorate School in Environmental and Industrial Fluid Mechanics in Trieste, Italy. Working under the supervision of Prof. K.R. Sreenivasan, Prof. D.P.Lathrop and Prof. M.E. Fisher, she will work on numerical simulations of recconnections of quantized vortices in superlfuid He.

Apr | A new member is joining the lab. Enrico Fonda is italian graduate student from the Doctorate School in Environmental and Industrial Fluid Mechanics in Trieste, Italy. Working under the supervision of Prof. K. R. Sreenivasan and Prof. Lathrop, he is going to work on the superfluid helium experiment.

We have observed a clear distinction between quantum turbulence and classical turbulence, which may be explained by the reconnection of quantized vortices. Our recent paper describing the observations has been highlighted as an Editors' Suggestion in the October 10, 2008 issue of Physical Review Letters. The work has been further spotlighted in an accompanying Viewpoint article by J. J. Niemela. The movie to the right shows hydrogen ice particles, trapped on quantized vortices, as they reconnect. Circles have been put to highlight these events. This is the first observation of these events since their prediction by Feynman in 1955. Notice the evident elasticity of the vortices.

Vital statistics: you can read a quick construction summary of our three meter experiment in the “Extreme Machines” section of the September 2008 Popular Mechanics.

"Dr. Dan Lathrop: The study of the Earth’s magnetic field" is an interview with Dan Lathrop about the geodynamo research.

Dr. Lathrop and our work in geophysics were recently featured on NPR's Morning Edition. The online article by David Kestenbaum includes text, the radio broadcast, and a video about our work. Update: the piece was also picked up by Slashdot. 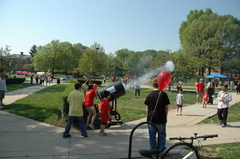 Fun with fluids at Maryland Day 2008! We built two large vortex cannons, ordered some theatrical smoke machines, and set it all up in the sun for a few thousand of our closest friends. Smoke rings rolled across the Physics Building lawn and a good time was had by all. See our photos! And don't forget the science: these vortex cannons demonstrate many of the principles at work in our studies of superfluid vortices.

We've added a new section to our site, Interesting Data, for sharing past experimental data that may be of interest to the scientific community. A few data sets are posted already and more will come soon. Feel free to take a look—we welcome collaboration.

The three meter experiment now spins under motor control—watch our YouTube movie! We are debugging the system with water as a test fluid, and will soon make Lagrangian flow measurements in collaboration with colleagues from the group of J. F. Pinton. Sodium experiments will follow. more… 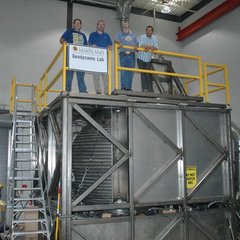 Construction of our three meter spherical system (larger picture) is nearing completion, and we expect experiments to begin this fall. more…

Interested in a general introduction to the magnetorotational instability? We've contributed an article to Wikipedia.

We've identified the presence of inertial waves, which seem to be forced by over-reflection, in our 60 cm sodium experiment. Shown here are experimental measurements (left) and theoretical predictions (right) of the magnetic field produced by two wave modes. You can read our manuscript, submitted to Geophysical and Astrophysical Fluid Dynamics.

Our technique for visualizing quantized vortices in superfluid helium has been published in the 1 June 2006 issue of Nature. You can read the full text or download a PDF. You can also read more about our ongoing work with superfluid vortices. 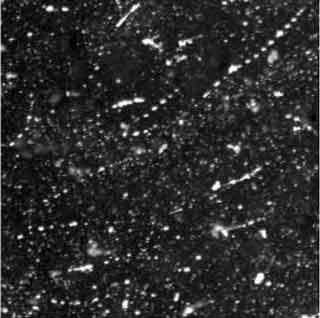 Quantum effects on the millimeter scale: the intricate shapes shown here are networks of quantized vortices in turbulent superfluid helium. We believe these are the first direct observations of phenomena of this kind. more…

Our work has been featured in a number of public outlets lately—you can read about us in Discover magazine or Geotimes magazine; you can also see us on PBS's NOVA. 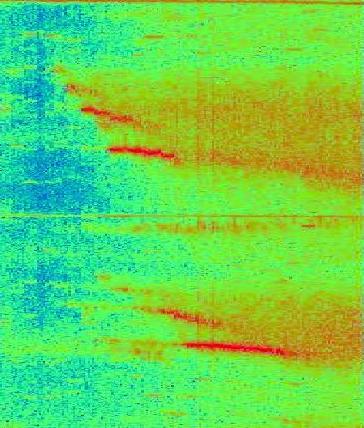 This image (click for a larger version) shows a color-coded power spectrum of the magnetic field in our 60cm experiment, where frequency is on the vertical axis and rotation rate ratio is on the horizontal axis. The color indicates the power, with red indicating the highest power and blue indicating the lowest. more… 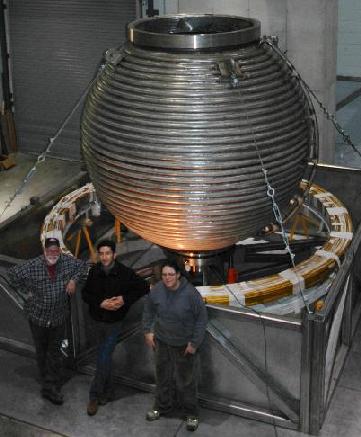 This three meter experiment (larger picture) is the latest in a sequence of laboratory models probing MHD turbulence and liquid metal flows related to the Earth's outer core. more…